Monday. Good plan,  check out and drive to preplanned parking spot in town. Even cleverer check out the parking spot on google to see that it has no roof.

Every day is a new learning experience with the campervan. Parking in a town with narrow streets and small parking areas being one of them.

Karlovy Vary was one of Europe’s best known spa towns, especially when this was the thing for High Society to do. It was on the itinerary for wealthy socialites and the magnificent buildings in the town bear testament to this. Strung along a valley the town boasts a dozen really hot springs , each of which is supposed to cure a particular set of ills. I tried a little sip of one and the only ill is that it made me feel ill. Think rotten egg smelling, iron nail tasting and you start to get the picture. This was the easy one apparently. Rose seemed quite at home sipping from various taps along our walk. The town is very touristy, with a huge number of Asians being herded around by your guided holding umbrellas aloft. 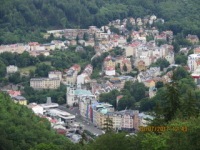 Rose discovers that there was an old wooden funicular that for 40 krone each (about 23ZAR) would take us up and down to what proved a stunning observation tower, Diana’s apparently.

Once we had done the tower, taken the obligatory pics with various cell phones, fancy cameras and a selfie or two, we were quite hot and sweaty. Time for an iced coffee. Whilst drinking said coffee two peacocks wandered amongst the guests, one of them your usual purple and blue, the other a pure white one! Although unusual they are not albinos but a separate form. Unfortunately both of their tails were rather forlorn and neither bothered to show them off.

Back down the hill on the funicular, took a shot or two of the fanciest hotel in town, Grand Hotel Pupp, used in one of the Bond films, not a dog of a hotel.

Back to the car park and on to our next stop, another spa town,  Marianske Lazne.

A very friendly and informative host and a really pretty but small campsite just outside the town immediately lifted our feelings about camping in Czech, after the less than favorable experience yesterday.

We learnt that the almost deserted

settlement where the campsite is situated was formerly largely inhabited by German speaking Czechs, of which there were quite a number all along the border area; during the war these Czechs were supporters of Hitler’s and his policies; as a result after the war and the negotiations at Potsdam all the German speakers were expelled from Czech and as a result quite a lot of towns and villages were left desolate.

The human tragedy and still visible destruction, desolation from the war and subsequent communist rule both here and parts of former East Germany has been an eye opener and emotional dagger over the past few days. But human spirit survives and rises to the challenge.

Tuesday. It stormed ….so we stayed in bed. Well in our pj’s and read and read and read more. what a glorious time. We did venture out later for a walk and the scenery around us was really breathtaking.

This has been one of our best campsite experiences so far.

In the morning, after a  sexy tortellini supper and a good sleep we briskly walked the 3 km into town.

A much smaller, less opulent spa town; although still boasting such luminaries as Edward VII, Goethe and Chopin. The water proved to be equally sulphurous and metallic.

A good walk around the town, stopping to take in the delights of The Singing Fountain. Jets of water spurting, spraying and soaring to the sounds of, in this case Beethoven’s 5th. At another hour you could get Vangelis, Andrea Boccelli or even Celine Dion!, my heart might not have gone on.

We then wondered off piste so to speak, searching for a ski-lift, cable car? that seemed to be somewhere in the lush forest above the town. To no avail, but we certainly gave ourselves a good workout and even trod in the footsteps of Edward VII and Goethe along the way. A Goot Royal time was had by both of us.

A refreshment in one of the numerous, really well maintained parks in town. Grocery shopping was next on the agenda, but Rose had noticed a dress she quite fancied, ( how unusual). Unfortunately, sigh, the dress didn’t fit her or the boodget.

Stocked up on some groceries and drinks, then caught the bus out of town and walked the last km or so back home.

Spent the evening relaxing, catching up with admin and planning our assault on Pilsen

We had such a great weekend
Anniversary spoils are the best! Chris took me to @100montaditos ( sandwich shop) for lunch yesterday in our shopping centre & then told me to go wild and buy some clothing in @leftiesofficial ..(a Mr Price)I thought maybe he was planning something really special for dinner & I was right. We checked into a lovely rural hotel in Lucena del Puerta( which I booked) for the weekend. Dressed up we went into town and discovered it’s pretty small and not really any eating options open so instead he bought us an ice cream , packet of crisps and some cherries. We sat on the patio with some drinks and our snacks & had a wonderful evening. Love is …..Ps: I did research and send him links to 3 very fancy restaurants, hint hint but no he is keeping us real- probably real close to the booget! PPS: we still have the whole weekend ahead of us so watch this space.
Yesterday we celebrated no 2 of our 3 wedding anniversaries! 14th of June was the day we signed on the dotted line. 5 years later we are making good on our promise. To find adventure and keep laughing x
Bologna is our favourite Italian city. It’s hard to explain why as for most it’s not the cleanest or neatest.
We flew from Bergamo to Pescara and who was waiting for us …..yes Tanya & Salvo. Yay to family reunions.
Here we are back in Italy.