We are making our way from Kobarid to Kranjska Gora. Through the Julian Alps and up and over the Vršič Pass.

First another waterfall or Slap in Slovenian. This time it was Slap Boka, not Slovenia’s highest waterfall but considered its mightiest. Its between Kobarid and Bovec and we parked and took the steep walk up to the viewing point. It was worth the climb.

Then onto the Vršič Pass with an elevation of 1611 meters is magnificent. It is the highest mountain pass across the Julian Alps, in fact it is the highest pass in Slovenia. The road was originally improved and developed for military purposes in WW1, all by the Russian prisoners of war. There is a beautiful Russian Orthodox church built along the lower bends, which was built in honor of the many Russian POW who died in an avalanches during the building of the pass. We paused at the top and took some pics, a great laugh that they charge to park in parking lot right at the top. So everyone just double parks along the road (us included) Then done the other side with a stop for lunch and visits from the local cows.

This pass has 50 hairpin bends, all numbered so you can count them up and then count them down. See below a map of the pass so you can see from yourself we were not joking and Chris was pretty exhausted!

We are not sure where we camp tonight but we have some ideas. We stop off at a lake as you approach the town, and sit down at the bar at the edge of the lake. Beautiful stylish chairs, very chilled beach bar place. The lake is beautiful but weird, as Tanya said a bit eerie like the one in the movie ” what lies beneath” but the drinks are good and the people watching fascinating.

We need to do a little shopping so we find the nearest supermarket. Now to park, small domestic as I’m apparently not concentrating and I don’t notice the sign language conversation going on between him and the woman in the parking bay next door. I’m not that good at seeing thru metal but anyhow, a little frosty between us. Also my mistake I choose grapes and they are the most expensive fruit to buy you know! I mean really grapes! Ok so we eventually make friends as it’s hard to decide on dinner without some love. The thing is , living in such close proximity means you have to get on, so you soon realize you have to work things out pretty quickly.

Chris: Definitely not concentrating! My WIFE is supposed to be my eyes and gaartjie, so I don’t bang Pozzi in the rear. Braille would have been more useful . . . Never realised that she could lip read so well until she suddenly threw back all those four letter words. LOVE not being one of them. But I do LOVE her.

We found a lovely camp site. Camp Spik. Pretty big but really beautiful, well organized and the wifi is brilliant. I know I know why do we care in this beautiful setting, but hey how do I write this blog and upload pics and catch up with family if we don’t have it!

We settle in, take our usual evening stroll to look around and make a superb dinner of pork kebabs( I think)

The plan for tomorrow is visit Lake Bled, and then drive across into Italy as it’s time we moved towards going back. I cannot believe we are even thinking about going back but all good things must come to a pause…

We get up early and decide we will visit another of Slovenia’s attractions, in Triglav National Park, it’s another waterfall. This time Vintgar Gorge. We arrive early together with a thousand other people who had the same idea. We are directed to a parking and we join the queue to buy tickets. Let’s just say we queued for 30 minutes but it felt like an hour. As you can see from the pics it was really awesome, beautiful, stunning and all that but there is nothing peaceful about walking with a crowd of people in front and behind you. But I’m being unfair it was a fantastic experience and I would recommend it as the water is clear and green and scenery is lush and green. We took a ton of pics and walked back. 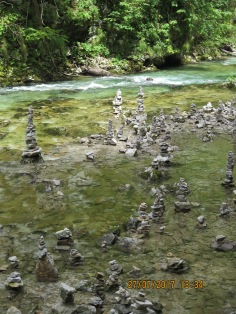 New trend we saw everywhere where people build these cairns..not sure of the significance

The queue for Vintgar gorge, and Chris walking up and down impatiently

Vintgar Gorge, how beautiful is the water 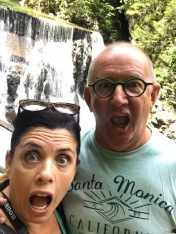 We park at the cemetery at Lake Bled and walk down to the path that goes all around the lake. It’s still, calm and warm. There is an island in the middle of the lake with a church. The story is that only a certain village people are allowed the license to operate these boats on the lake. They are called Pletna boats. As we arrive 3 boatloads of bride, bridegroom and wedding guests are pushing off. It’s quite popular to get married on the  church on the island. How romantic!

We continue our walk along the riverside promenade.

We caught site of an attraction that looks like tobogganing and now we walking along looking for it. I’m not really sure but Chris looks like he wants to try and I’m always keen for excitement. We buy our tickets and then the queue. Again in one day Chris holds it together just long enough for us to get to the front. A ski lift up and then a thrilling luge ride down! Turns out Chris was going much faster than I was!

Gossip: ( don’t read if you don’t approve) the reason I’m laughing so much in the pic…is that the guy strapping us in up top had just told the lady in front of us she was too fat! No kidding. She wanted to ride with her son who looked about 7, but he strapped in the kid and before she could react or climb in, he sent the kid zooming off on his own. She looked upset and said I wanted my son to come with me, he looks at her and says “No , you too big! ” you can’t fit you and him in the cart. Look the straps tight already cos you too big” She was so annoyed and then he turned to us and said” really? She wants to ride with him, but she is an elephant! ” nasty I know but damn funny. He is not exactly skinny himself!

After our thrilling ride we walk back. We have to have a kremsnita. It’s the famous cream cake from the Lake Bled. We go to the ” original ” hotel that first started making them, the Hotel Park. The cake was like a custardy base with cream and crisp flaky pastry layers. It was good and there you go, cake for lunch again!

We went back to the car , and now it’s quite late. We are now heading back the way we came , back through Kransjka Gora and cross the border into Italy. We had seen a camp site just a 30 min over the border.

This is the latest we have ever left it to find a place and we are a little nervous, ok I was.

Background to my next story: we are using a Tom Tom, but it does not work in Czech Republic or Slovenia, only Western Europe so Italy, Austria and Germany. I have the unenviable task of navigating when no Tom Tom. Now you remember we have already had a incident on the border of Austria and Czech Republic. Now I’m navigating from Slovenia into Italy and instead of Chris giving me an address , he decides to choose a random spot on the map. Then apparently when we get there, I’m going to switch on the Tom Tom and find us the way to the camp site. Great! So trundling along, we see the border ahead and all excitedly we cross into Italy. Now I’m trying to get the Tom Tom programmed to the next place but I’m struggling to make sure it’s correct. I don’t want to take us on a wild goose chase to god knows where, especially as it’s late. I ask Chris to stop so we can confer but no he keeps driving. I tell him I’m not sure of the direction so please pull over so he can check but NO he keeps going. All the while I’m still navigating us towards this random spot HE chose.

Chris: Not quite sure why the programming was not done during the hour of driving before we crossed the border??

Rose: The map indicates us to keep right, I said go right! He says really I say yes it says so…and just like that we are on the highway …..to Austria. Oh shit! For F$&@k sake Rose he screams! But its not my fault I protest but my heart sinks as we keep driving along for 3 km with no sign of an exit or a place to turn around!

Chris: All we had to do was keep on straight. Simple really.

Once you’re on this really lovely bit of tarmac there is no escape, we cross from Italy into Austria, having just left Slovenia. . .and there is no turning back. With visions of being stopped by the Austrian Gestapo traffic police for not having a Vignette and really keen to get to camp before dark I fairly calmly enquired of my dear, beloved wife as to why in heavens name she thought that it would be a good idea to travel to Austria at this particular juncture. All calm and even tempered as I usually am.

Eventually managed to escape the Autobahn; turn around and scuttle back into Italy without any blue lights chasing us. Despite the hot weather the temperature inside Pozzi was positively icy. Always fun making up. 😊

Ok so enough about that we have to get a move on now as its late and we have no place to stay yet…oh that’s a story on its own, but wait for next time!

2 thoughts on “Bordering on the ridiculous… lakes, slaps & waterfalls”