We hit the road and headed towards the coast. We have a date with our friend Sue to meet in Moraira so we do need to plan a little and not just wander along.

This next  camp site I had chosen was because our book said it is run by a French couple and it’s in a nature reserve filled with olive and orange trees. We got there late afternoon and we weren’t disappointed. Well especially Chris when the lovely Patricia told him they made fresh croissants every morning. The camp site is  called L’Orangeraie and it totally lived up to its name. We walked into the really working class village of Calig just down the road which we explored pretty quickly, especially as Chris nearly dislocated my shoulder as I made a move toward the fairly mundane looking church door. We did find  a small bakery which was selling both chocolate and marmalade filled empanadas, we bought a few of each. Chris:They were damn good.

In true Chris fashion we ordered 3 of each so that meant he got to decide which one he liked best to eat as his no 3! Lucky I liked the orange one cos surprise surprise he preferred the choc one. The rest of the evening was spent cooking dinner and relaxing in our lovely spot. I have my own bottle of Vermouth bought in Morella so I’m happy. 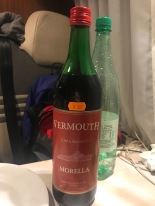 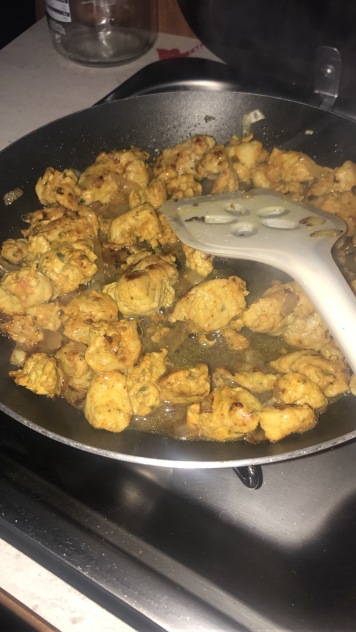 The next day it was cold and drizzling ALL day so we stayed in our pj’s, ALL day. Well till afternoon at least. We had seen the weather forecast had said a thunderstorm and chances of flash floods and we saw the owner walking around cleaning the drains. Chris was sleeping and asked me to wake him as the awning was up. He woke himself up just as I was going to wake him and was in trouble cos I had waited till the last minute. ‘ do you remember the last time we waited too long to take it down??!!!'(read about it here) Well the storm was quite a show. We were tucked up inside and no flash floods. Only problem was we lost electricity and weren’t keen to wake up the owner by that time or go out into the rain and fiddle with electricity in the wet. So we did without.

It was all fixed the next morning and packed and left, next stop the coast , Costa Blanca!

We needed some provisions( essentials) as one does when you haven’t been shopping for 3 days! We found a Carrefour in Vináros and spent a glorious few hours there. Don’t ask me what we bought exactly but we did get gas for our new camp braai and managed to stuff our faces at the restaurant outside the Carrefour. The Carrefour was paradise and we had to drag ourselves out of there. We loved the huge legs of Jámon advertised for ‘back to school’

“back to school” promo for Jamón 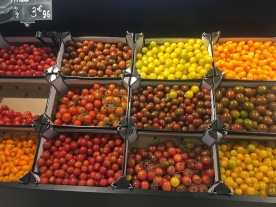 We drove from Vináros past Benicarló with its awful high rises and along the beach front road of Peñiscola. It was heaving with people and restaurant after restaurant along the promenade. When we found the camp it was right across from the beach and I jumped out (as it’s my job) Guess what? No room! Now what…. but secretly we both relieved because this place is just too touristy and too ‘unspanish’ .I had no other ideas but Chris looked on the map and saw a camping spot in a reserve quite a bit further on. So new direction and off we go. 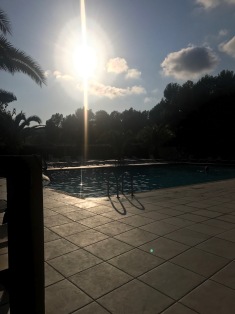 This camp site was off the beaten track literally and it is situated in the Parq Natural Serra D’irta. It’s about 1.1km on a dirt track from the town of Alcossebre. It was magnificent. Lovely lovely pitches again with hedges all around the fairly big pitches. It’s called Camping Ribemar. No wifi signal and only 600m to the waters edge. You can also walk along a path from the beach to Alcossebre and its only 4.5km. That evening we went for a long walk, exploring the sea front. The beaches aren’t white sandy ones like South Africa but small coves with pebbles. And the first time I saw people on the beach they were both men and both buck naked! But each to their own. We ended up walking a long way but the park is lovely and very unspoilt.

The next morning we were up early and ready to walk into town. It’s a fair distance but its through dappled shade from the trees , along a beach path and you end up walking along a promenade. Little beaches hidden around each bend, and lots of people enjoying the sun.

The town was still a wee bit touristy but it had a feeling of Spain about it. After a long walk we decided to have drink. We ended up with pancakes with dulce de leche and I tried Horchata. It’s a traditional drink made with water, sugar and tiger nuts( or almonds).It was delicious and refreshing.

We also checked the property boards and we were pleasantly surprised to see that the prices are not exhorbitant.  It’s a long walk back and we were pretty hot and sweaty so we decided a quick siesta before we set off to the beach.

I’m not going to say much about the beach except we swam in the ocean for the first time in forever! It was amazing BUT when I got out of the sea I was perplexed at the older gentleman on the beach being stark naked and not worrying about sun damage to his bits! Chris said I shouldn’t stare but it was hard not to…. ok wrong choice of words.

That evening we braaied as it was Heritage day in South Africa and traditionally S.Africans call it Braai Day and most people braai(BBQ). We christened our new camp braai and it was fun.

The choice of where next was a tricky one. We have decided we will give the beachy places a miss for 2 nights and we head into the hills.

Seriously beautiful sunset in Ayamonte tonight. Some family time and some fun.
It’s a good feeling when you wake up each morning
So our fabulous trip to Newcastle was followed by a fabulous road trip to Banchory , Aberdeen.
So we in Newcastle …after paying just a few euros for a ticket , and after paying a lot of euros for testing we arrived excited to see our family.
You guys would never believe us but we don’t just party all the time. We do chores, housework, finances, medical appointments & some exercise. But you don’t really want to see those pics do you? So instead I show you some pics of us making the most of the end of summers days ….a beach day at Praia Fabrica & a Sunday Lunch at @dompetiscoalgarve
Hi there. Things have been slowly getting into a rhythm for us. Me in the studio and Chris doing ( god knows what!) We are enjoying the last few days of freedom before school starts again. The past 3 days have been a celebration of Our town Ayamonte known as “Fiesta de las Angustias “ it’s a little unknown to us so we finding out as we go along all the traditions attached. But last night we went into town to take a little walk and decided to stop and have a drink at our local. And then this happened. In awe of the dancing, the singing and the way in which everyone just becomes involved. Everyone gets involved in the singing & it’s really wonderful. Including me getting roped into the circle to dance. What I love the most is that Chris knew at least 3 of the ladies ….his best friends from the local grocery store ( that he visits most days). His friend M did tell him not to expect fresh fruit & veg today!