When Chris and I were discussing getting married back in 2015, we couldn’t decide where was best. Most of Chris family( actually all of them) live in the U.K and a fair share of my family live on the continent. Taking the cost of them coming to SA, and the thought of the very long guest list of South African friends we decided to take the easy option…get married abroad. Our thought was choose a place we like and have a small intimate wedding with no fuss. Hmmmm guess again!

Roll on to 2016 and our answer to the inevitable question of “when’s the wedding” we started telling friends we planned to get married in Italy. Why Italy? you might ask, because it has been one of our favourite places to visit, especially the area of Emilia Romagna with our favourite city of them all Bologna. We love the scenery, the food, the people, the food and the food. Of course we must also be quite good sales people as whilst we were telling everyone how wonderful this place was, we found quite a few saying..”oh sounds fantastic, maybe we will come!” and so the groundswell started…everyone was coming to Italy!

Our small intimate wedding was now an event, and we needed to find a venue. Finding one villa to take a few family is one thing but now we realized we needed more than one villa to accommodate the increasing number of friends who going to share this experience with us.

How on earth are we going to pull this off?

Chris found the venue on the internet, this was the start of Parsleys Pursuit of the perfect wedding venue. We had searched for villas all over the Emilia-Romagna area and although we found many beautiful ones , we needed to find one with enough accommodation close by as well for all the guests. So when Chris saw this villa, which said it  had more than one villa on the property we put it on the top of our list. In a whirlwind trip in October 2016, in which we visited London, drove to Cowbridge Wales to see Tanya(my cousin) & Salvo , went to Charles(Chris nephew) and Hayley’s wedding in the Cotswolds, we flew off to Bologna. ( have I told you before about Chris’s propensity to visit 5 countries in 4 days?)

Visiting the Cutino’s in Wales.

The happy couple, Charles and Hayley 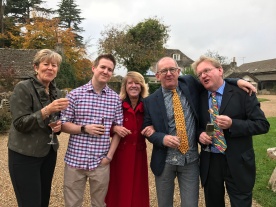 We arrived in Bologna late in the evening and had planned to stay overnight in Modena on our way to Tabiano. Luckily(for me) Chris was the one  to put the address into the GPS so when we ended up on a quiet residential street ,with nothing looking like a hotel close by, I was not in trouble. After a phone call to the hotel, where they assured us they were nowhere near to we were, we reprogrammed the GPS and arrived safely and in time to eat dinner.

Tabiano Castello is a small hamlet on the outskirts of the spa town, Salsomaggiore terme. It is about halfway  between Milan and Bologna, very close to Parma and not too far from Modena. We drove through beautiful countryside, winding up the hillside and marvelling at the beautiful scenery. I was excited but also a little nervous, what if this venue was crap, what if we didn’t like it? We had planned to get married in June 2017 so we needed to be decisive as our wedding guests had tickets to book. BUT as we turned a corner and drove up the hill towards the castle we both knew, this was it. 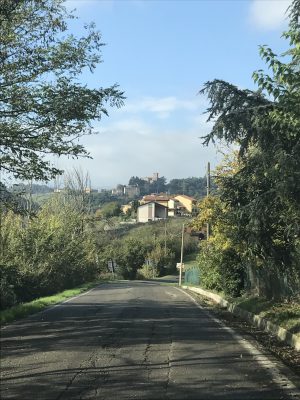 Giacomo, whose family own just about the entire hamlet of Tabiano , met us at the Antico Borgo Tabiano Castello.  ( click on it to see the website) He is a charming business man and an extremely good host, and we were treated like royalty. The hotel is just below the castle and has been transformed into a luxurious retreat with a wellness spa and a restaurant serving food from the region. The rooms are spread over the magnificently restored buildings and are surrounded by beautifully tended gardens. The rooms were tastefully and authentically decorated. They have double rooms and then some amazing suites and family rooms. The restaurant is also in its own building and the  view from the terrace is out of a movie. They serve breakfast and dinner and you can sit inside or outside on the terrace in good weather. The kitchen and reception area were originally the place where they used to make the pecorino cheese, and again the decoration is just perfect with attention to detail at its best. 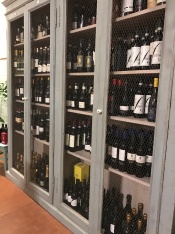 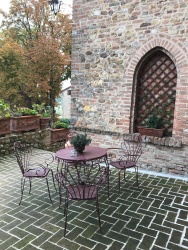 Next up Giacomo showed us the villa. Wow! There are 4 villas on the property , and each one is different and special in it’s own way. They are decorated in a typical Italian fashion, with big tables and outdoor areas which encourage lots of eating and entertaining. The bedrooms are unique and each one has a character all of its own. The one we were shown for the wedding was perfect in every way. Click here for the link to the villas. We stayed in Ca’De Poi. 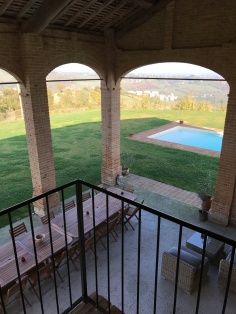 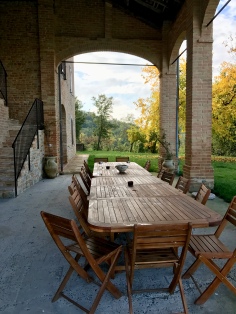 We were bowled over, he took us for lunch to a local restaurant called Locanda del Colle, or Oscars ( named after the owner) and we were really convinced. We ate white truffle freshly sliced over fried eggs and it was so good.  Giacomo gave us a tour of the family castle, and told us the story of his great great grandfather and how the family came to live in this castle and we were smitten ( well I was with Giacomo)

Homemade pasta with lemon sauce, so delicate and light, at Locanda del Colle, 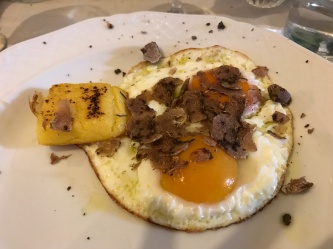 The castle is at the top of a hill overlooking a beautiful valley and you can see for miles around. It was built in the 10-11th century as was owned by many important Italian families and the subject of many feudal wars, but in the 19th century is was bought by Giacomo and Rosa Corazza , and they renovated and decorated with beautiful stucco and frescoes by the best artist and artisans of the time. Theirs was also a love affair which brought peace and harmony to the castle which has stayed in the family ever since. 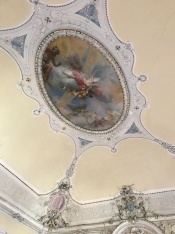 Ceiling in the Tabiano Castello 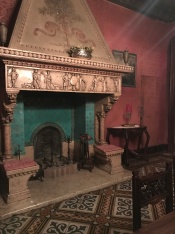 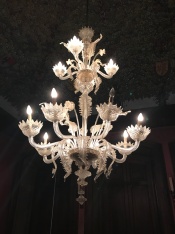 history on show at the Tabiano Castello

The next day we spent some time exploring the area around the castle, especially the spa town of Salsomaggiore Terme. It’s a town steeped in history, and full of spa hotels, and especially a beautifully restored thermal bath complex known as the Berzieri Insitute. First built in the late 19th century in the heyday of art-deco it was a symbol of the city not only for its hot springs but also for its art and architecture. The main building was mostly constructed in 1913 and was decorated by designs of Galileo Chini, an art nouveau genius. Click here to see more of his work in ceramics. Our walk around the town revealed many more art nouveau buildings and a very stylish shopping area, as well as a fantastic Gelateria which we had to try of course. 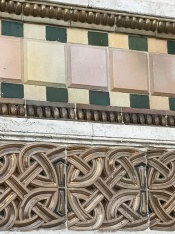 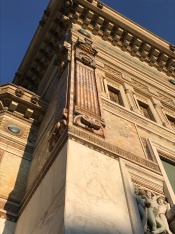 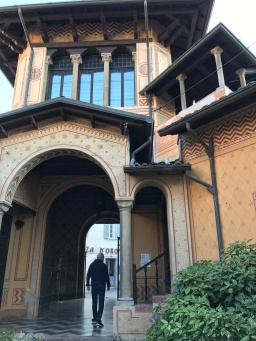 After 2 days of Giacomo’s attentiveness and seeing how much passion he had for his family and the business they were running we knew this was the place we wanted to hold the wedding, –  but now what about the budget?

So when we started this journey I was gainfully employed, a director and shareholder at a leading clothing brand, so lets just say my attitude was “MNO” ( tongue in cheek “money no object” ). Those of you who have read my previous posts, will know that that has changed a lot, and now we have AATB ( all about the booodget!) Somehow I managed to make it work, well lets just say it’s a bit like childbirth , the outcome was so good, you forget the pain!

Next time I will tell you about the big day, but maybe we fit in a little post about Milan and Fontanellato…lets see.