Let’s just cut to the chase shall we?

Having rented 2 magnificent villas at the Tabiano Castello estate outside Parma, Italy , booked numerous rooms in the Antico Borgo and various other rooms scattered around the area we were ready to party. A large part of why this wedding was so successful (I think) is that all the guests had the few days before to get to know each other. This meant on the night of the wedding 99% of the people were already friends. This makes the wedding atmosphere so much easier and more relaxed. The bride and groom did not need to introduce anyone to anyone, it just gelled.

Leading up to the wedding we (Richard and Chris) planned a few group outings which most of the guests were more than happy to follow along on. One was a visit to the balsamic vinegar producers outside Modena, and then another a visit to see how the Culatello di Zibello DOP was made. Culatello is one of the most prized salami’s in Italy: mentions of this delicacy date back to the 15th century. … Culatello is produced in the flatlands located south of Parma, near the Po River. 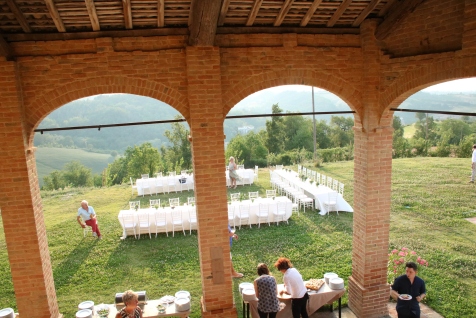 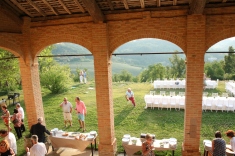 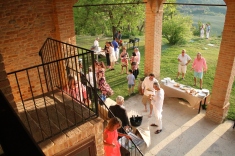 The villa sleeping arrangement might have worked out fantastically(if I say so myself). I spent quite a few angst filled nights and maybe a small squabble or 2 with Chris before coming up with a plan. My plan worked and this is my advice. Put people who know each other with people who don’t but with something in common. You get easy going guests who get on with everyone, so mix a few of those in and voila! So I must talk about Villa B. The bridal couple stayed in Villa A, and I had to factor in a downstairs room for a friend who had a bad knee. I needed some close friends “the safers” (Gillian and Richard) who were integral in the running of the kitchen and serving of delicious meals, to be close by. I had ” the fixer” and her husband next door to me. Alli was such a rock on the day, smoothing the lines and liasing with the support staff without making me feel like I had a care in the world. Then to fill up the rest of the villa A, our dearest best holiday friends, and my close family, 2 boys, 2 moms and a sister.

Villa B was a mix of single gals, friends couples, my ex mom-in-law and sister-in-law as well as some old married couples! I sure got this mix right. They promptly nicknamed themselves Villa B, and what started as a nice group of people sharing a villa and turned into friendships that I think will last the years. Its also so great that people who knew Chris well, told people who only knew me well lots of background stories and it really served to make everyone one big family. I think most of Villa A would have loved to be a fly on the wall to hear the stories being told till 2 am in the morning. Lets just say “what happened at Villa B, stays at Villa B” 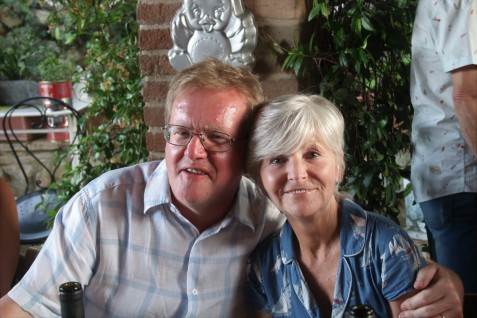 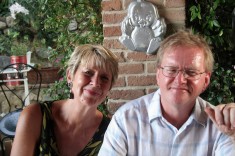 There is a tradition, probably comes from America, of doing a dinner the night before and calling it the rehearsal dinner. We put on a rehearsal dinner with a spin. We started at the castle , where all the guest were taken on a tour by Giacomo and then treated to cheese and meat antipasto with copious amounts of prosecco served afterwards in the beautiful dining room. I got great feedback , and I really recommend it. We then wondered down to a local restaurant next to the hotel. Run by an independent restauranteur called Oscar. He is quite a character, having worked most of his career cooking meals for an very well known Italian football team. We had a great time in general, we did not have the best service that night as I think he had over booked himself, but I won’t dwell on this issue as we previously had exceptional meals there. The evening was fun and helped to cement the friendships formed over the past few days.

our guests admiring the castle rooms

Flowers: I had decided not to use a florist but to use the in-house help of Ray the resident gardener. We decided in May to use the amazing brightly coloured roses growing all over the estate, but the summer was so hot, that by the time End June arrived they had all overblown. Crisis? , no number one lesson for brides, be prepared to change if something does not work out the way you planned. Don’t stress, just change the plan.No one will know what your first plan was. (well except if you write in blog like me!) So I looked around at what Ray was using for the hotel flower arrangements and saw he was using herbs, lavender and wild flowers growing in the field. They looked so beautiful in their simplicity. We decided to use the same idea and I think it was perfectly in keeping with the ethos of the wedding, which was come to Italy and be part of the country. I really really recommend Ray to do flowers and together with another of my good friends, Wendy, the flowers were absolutely wonderful. 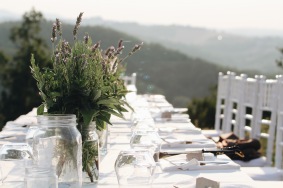 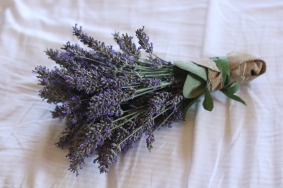 Food:Giacoma recommended we use the chef from the restaurant attached to the hotel, and at first I was hesitant as I was worried about the food being too stiff and formal. We did NOT want wedding food. But again no worries as Giacomo got our brief totally and the food was exactly like one expects Italians would eat at a big family lunch. We started with tables groaning with antipasto , meats from the region, locally sourced cheeses and rustic focaccia with vegetables. This course was served as the wedding blessing ended and everyone was milling around and photo’s were being taken. Later once everyone had sat down, the primi of tortelli with herbs and ricotta as well as lasagne alla bolognese and a home made stuffed pasta with veal and ginger was served.Is your mouth watering? So it should it was all delicious. In hindsight we could of served smaller portions because by the time secondi was served everyone was a little full. The second course was a BBQ with the chefs cooking a selection of meat in front of the guests. Now for us South Africans that might be considered a normal Sunday lunch, for the international guests it was a treat. And the array of meats being cooked was supreme. They also served salads and the quintessential aubergine parmigiana that is always served in this area. One of the reasons we chose Emilia Romagna was the food, and it really did not disapoint. 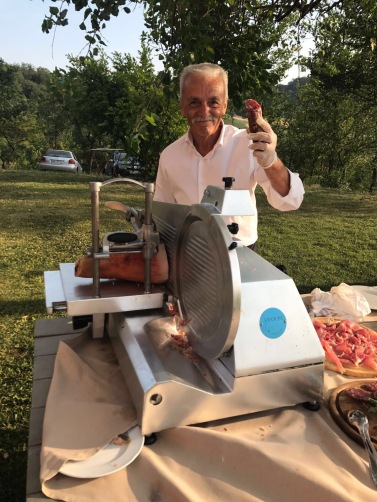 The dress: I chose to design my dress with a designer who I had the privilege of meeting a few years back. She made a matric ball dress for my niece, and I loved her at first sight. Odette Gomes is a very warm friendly, creative, bubbly and extremely talented designer, and I am lucky to have had her make my dress. I did not want a wedding dress in white , but I wanted a wedding dress in colour. It was exactly what I imagined and more. I felt like a princess in it. 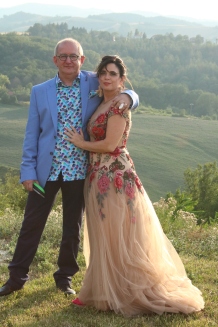 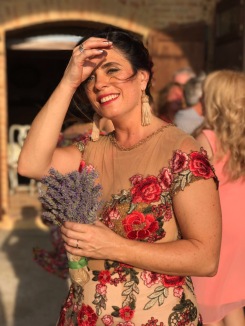 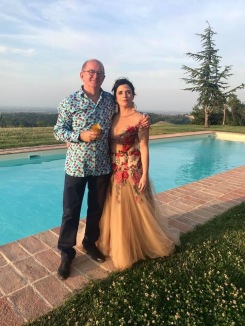 The hair and makeup: You really have nothing to fear when one of your best friends is a hair stylist and make up artist. Selena Bowers not only kept me calm, relaxed ( not so cool) as it was 40deg! But having her there was the best present ever. 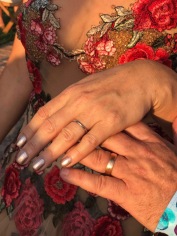 The ceremony: So here is the secret, we did not actually get married on that day! We got married on the 14th June at a private ceremony at home. For the wedding in Italy we opted for an informal, unofficial blessing. Who better to do it for us, but our very best friend Richard. We chose him for him calm , measured and philosophical approach to life. He did not disappoint us , and together with his daughter who put together a beautiful playlist we ended up with a ceremony that left NOT one dry eye in the audience.

Music and Photo’s: This started off a small wedding in Italy remember so we did not need photographers and Dj’s did we? But in the end once again friends and family stepped up and made the event memorable. Our nephew and his girlfriend arranged a variety of bluetooth speakers and the music never stopped and the dancing was great. Thank you Cameron and Charlotte.

On the photography side, I had my mum at hand taking pics and capturing the important moments. I was also lucky that George (daughter of the Safers” could make the wedding and became an integral part of the photography team. Between them I had a myriad of pics to look back on. I am still trying to get Chris to agree to a “trash the wedding dress” shoot, but so far no ways! 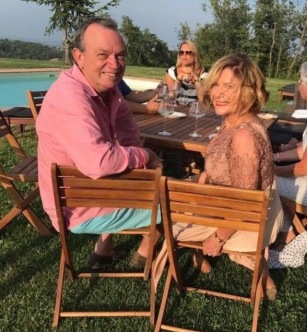 Pam(photographer & mother of the bride) and Neil

And that is the end  of a post that is too too long but its so hard to fit these memories into less words. if you would like to know more details, then email me and I’ll happily provide more detail or suggestions.

To all our guests, a huge thank you for making this the best wedding ever! 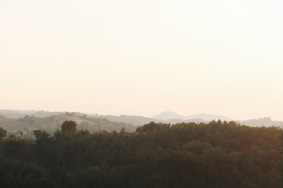 PS: Their really are too many photos to display, so I will put together a Facebook album for family and friends to see all of them. 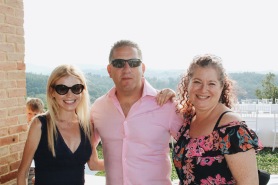 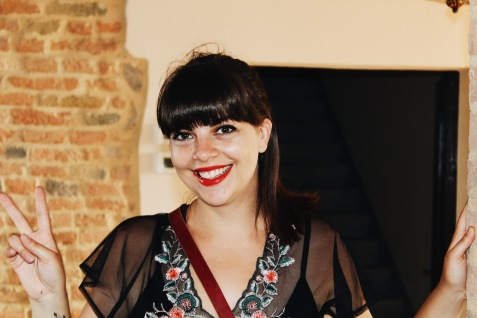 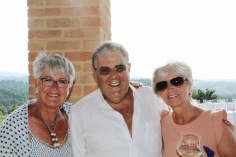 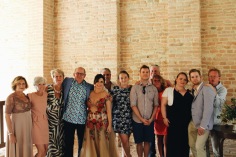 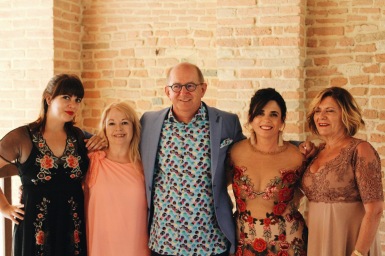 2 thoughts on “How to Plan a Small Family Wedding in Italy – or not!”