Festival of São João of Porto (St John of Porto) is celebrated on midsummer or the night of the 23rd June. the tradition of hitting each other on the head with a head of garlic or more modernly with a plastic hammer was never really explained to us, but it was fun anyway. Everyone starts in the afternoon with street parties that go all through the night. Then at midnight firewroks and if you are a diehard fan, you then walk from the riverfront all the way to the sea to watch the sunrise.

We decided early on we couldn’t manage the massive crowds ( must be our age) and so we looked for a quieter option. (hahaha)

football played on the big screens al around the city

So many people pour into town you cannot imagine. What is so lovely is that the entire city takes part and I mean every single person. As you walk along the streets you see people opening their doors and setting up barbecues and stands selling hammers, drinks and food. Many locals have tables set up and just have a full-on street party outside on the street. Most of the roads are closed so everyone can walk around. We made our way up the hill and away from the madness of the riverfront. The walk up was so entertaining. I’ll let Michael’s picture tell the story. 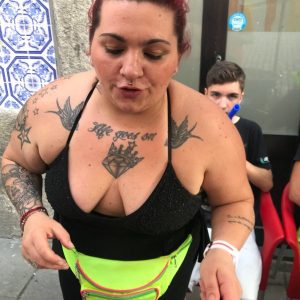 Up at the top of a hill on a grassy square people are just sitting and watching the sunset, ordering drinks from the sidewalk sellers and just chilling out. Alli did a little dancing for us and the noise of the hammers squeaking was the background!

After a couple or quite a couple of drinks and laughs we moved on just absorbing the sights and sounds around us. All around the city were huge stages and live music and we ended up dancing in the main square at the centre stage where a famous but old musician was about to entertain the crowd. We carried on walking until we got to the top of a hill which we reckoned would give us a good view of the fireworks. All around people were lighting Chinese paper lanterns and setting them off into the sky. The fireworks didn’t disappoint and the show was great. But by now we were feeling our age and so just before the end we started making our way down. Of course half down the hill we stopped for a midnight snack of ….I actually can hardly write this but hotdogs with fries in them. I’m taking a sausage of indeterminate origin, topped with grated carrot, and matchstick fries smothered in mustard squeezed from a hanging tit shaped container. It was pretty awful and pretty much hit the spot! 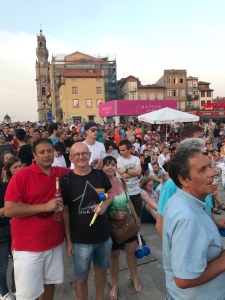 Now for the salmon run! We needed to go down the hill to our respective apartments and most of the population were coming up the hill from the riverfront. It was crazy! Now I could feel the one million people that attend this festival. At one point Chris was holding my hand and my feet were not touching the ground. As Selena says I felt like crying. But on we trudged like salmon swimming upstream and eventually after probably 40 min to walk 150m we reached the end. Never been so happy to see a front door ever.

So the festival is madness but I recommend it if you in the area, after all, you should experience the amazing sense of community in this city.

The next day we chose the chilled option of going for lunch in the nearby fishing town of Matosinho. We took the 500 bus and it takes about 25min from the centre. 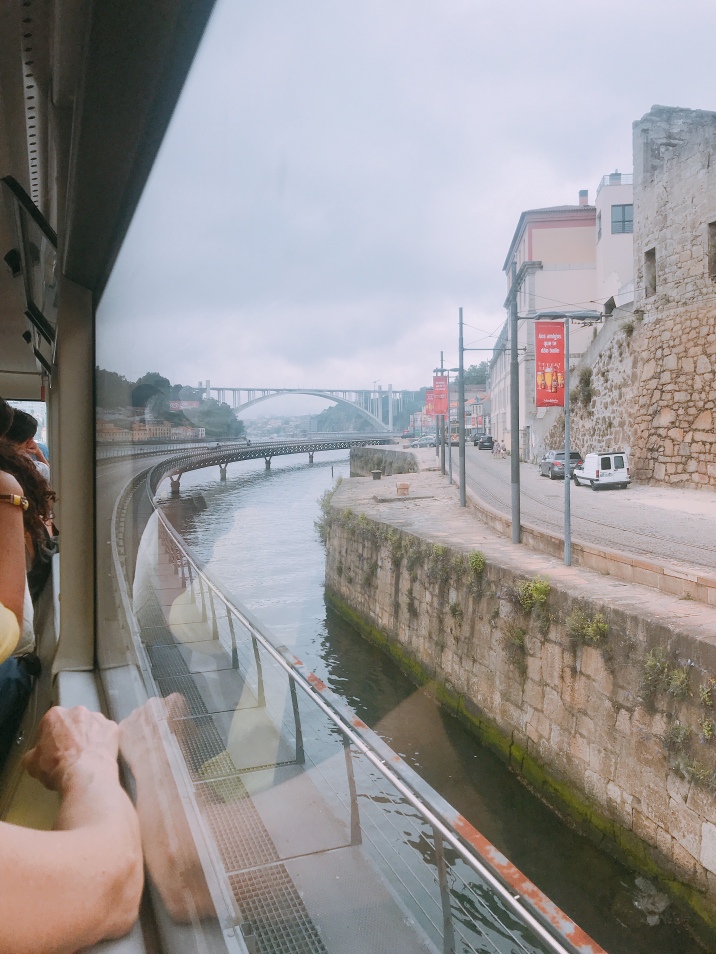 This is a proper fishing port where the fish is brought fresh off the boat and into the restaurant. The place we chose was perfect. We first had a walk around and admired all the open air barbecues serving the freshest of fresh fish. We had appetizers on a roof bar ( courtesy of Michael again) and the octopus salad and prawns were delicious. 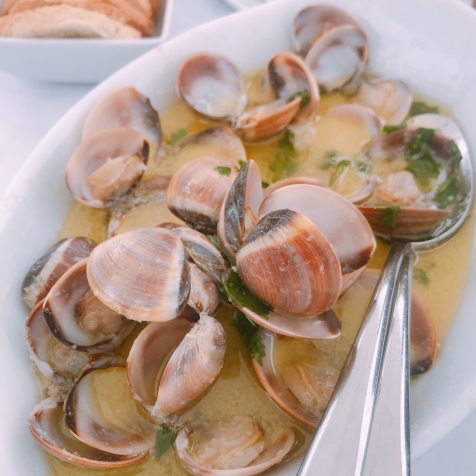 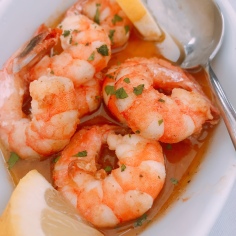 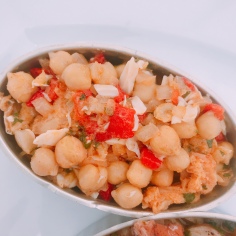 The restaurant experience was made better by having Rogerio their to educate us in the art of what to order and also to speak the lingo with our host.

Fresh prawns just simply boiled, barbecued calamari with just olive oil and salt. Gooseneck barnacles they taste like fresh seawater. ( ok so only Rogerio and I were impressed ) and then a freshly grilled sea bass. Add to this tomato salad with the sweet onions found in Portugal and we were so happy. Dessert a delicious house-made chocolate cake and some sweet sweet caramel sauce. What more could you ask for? We were so full and yet not at all bloated. 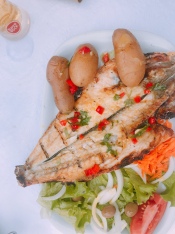 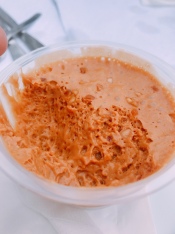 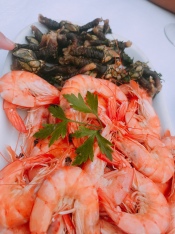 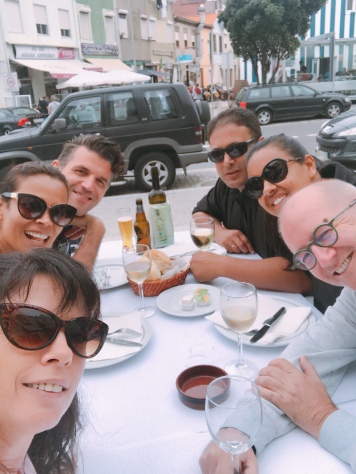 Our return trip was on the overground metro again a laugh a minute as we missed the first one cos the homeless guy could buy the tickets fast enough. ( long story) but I must say not only did my calves hurt from the steep hills but my tummy laughed at the endless jokes.

Ask Michael to tell you about when he ran down the platform and jumped onto the escalator only to discover it was the up escalator and he needed to go down. I don’t think any of us have seen his legs move so fast!

That evening a quiet meal on a  side street and then an early night.

Back to London for the foursome and on our way to Lisbon for Chris and I.

One thought on “São João – hammers and the floss.”

You guys would never believe us but we don’t just party all the time. We do chores, housework, finances, medical appointments & some exercise. But you don’t really want to see those pics do you? So instead I show you some pics of us making the most of the end of summers days ….a beach day at Praia Fabrica & a Sunday Lunch at @dompetiscoalgarve
Hi there. Things have been slowly getting into a rhythm for us. Me in the studio and Chris doing ( god knows what!) We are enjoying the last few days of freedom before school starts again. The past 3 days have been a celebration of Our town Ayamonte known as “Fiesta de las Angustias “ it’s a little unknown to us so we finding out as we go along all the traditions attached. But last night we went into town to take a little walk and decided to stop and have a drink at our local. And then this happened. In awe of the dancing, the singing and the way in which everyone just becomes involved. Everyone gets involved in the singing & it’s really wonderful. Including me getting roped into the circle to dance. What I love the most is that Chris knew at least 3 of the ladies ….his best friends from the local grocery store ( that he visits most days). His friend M did tell him not to expect fresh fruit & veg today!
Neuchatel as usual is beautiful & for the first few days so hot!
Lorräch was so quiet, and not just the people but the amount of electric cars really reduces the traffic noise. or maybe we just used to noisy chatty Spain that everything was so subdued.
We are back doing the thing we came to Spain to do!
I know I know it’s been a long long while and I’m not keeping you up to date. But life has been so busy & a little out of kilter with a guest in the house. But in true Parsleys fashion we haven’t forgotten to eat. Today’s special lunch was shared with Jon & Amanda. A lovely lunch of small plates that we shared finished off with beautiful rosé wine and some fine sherry. We enjoyed ‘ ceviche’ ‘ calamari’ ‘ prawn tempura ‘ foie scallop morcilla & tuna tartare to name a few. Sorry I wish I had written down the proper descriptions but believe me it was superb. This together with the perfect service makes it a must do in Ayamonte.