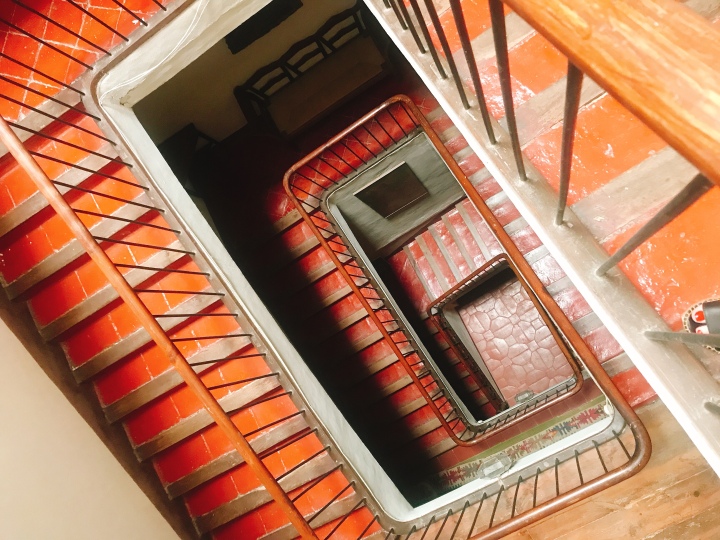 We left Logroño en route to San Sebastián ( Irun) but we decided to go back to Puente La Reina and have lunch first. Also have a look at what property is available. Hmmmm are you seeing a theme? We are thinking that this might be a nice place to buy property one day.

On our way, we see this imposing looking building up on the hillside. We were intrigued so a quick left turn and we headed towards the village of Villamayor de Monjardín. Firstly we came upon a bodeja (wine cellar) in a very impressive and beautiful villa with the vineyards all beautifully laid out and flowers and olive trees all around. We decided to have a look on the way back, so we continued up a steep hill up to the village centre. we soon saw the village was quite small so not much to see, and the route to the ruins on the top of the hill , could only be reached by donkey I think. Turns out the ruins are the San Esteban de Deyo.

Now we want to drive around and go back down the road but the road down is so narrow with building’s and wall on both sides, and we as inched forward one cm at a time, Chris was pooping himself. Eventually it seemed we were stuck and the only way we could keep going was to pull in the mirrors. As we are in polite company I don’t want to repeat the words he used to instruct me that I was not pulling in the mirror fast enough! I actually wanted to take a pic to show you all just how narrow the road was….but I was too afraid he would take my head off! so you will just have to ask him next time you see him…”Chris how narrow was that road?”

The wine bodega was impressive, beautiful old building and stunningly laid out. A sign for a great restaurant…A great place we thought to have a drink and recuperate. BUT I’m afraid this is a disappointment as no one came to help us, and eventually, when a lady did get up from her desk, she informed us that they did not do wine tastings. You can buy the wine if you like, but you cannot taste it first. And the restaurant was closed…”that’s all” We took a wander about and admired the scenery, and had a peek into the restaurant( which looked like more of a wedding venue), we got shouted at by the staff for looking (very rude lady!) and then moved on. Pity, it had so much potential…Oh well, maybe next time. 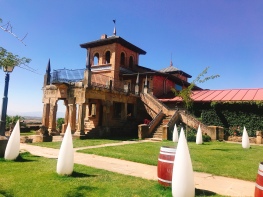 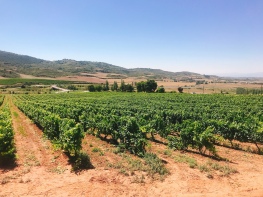 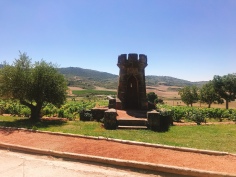 In Puente we walked around and took some details. We sat down at a lovely outside terrace of one of the many restaurants to have the menu del dia. We always have a laugh as it’s €1 extra to eat on the outside terrace in the heat. Only the tourists do it, the locals sit in the lovely air-conditioned interior.

Lunch was simple and tasty. I had a bean dish made with pork. They make a huge pot and then bring it outside and just dish it up at the table. Generous helping I had to say ‘enough’ twice! My main course was a fish stew. Delicate tasting broth with chunks of fish and seafood. Probably my best seafood of the trip. Chris has the freshest looking salad with tuna and tomatoes, finely sliced onion and olives. Check the pics and you will see. Dessert( postre in Spanish and Chris favourite word) was a house made flan( as good as my grandfather I promise) and Chris had the local white cheese they call cuajada with a berry sauce. €13.50 including everything, wine, coffee and bread. I love the Spanish menu del dia!

the best flan apart from my grandfather I have eaten so far…Puente la Reina, Navarra

Off we headed and we decided to get onto the highway and pay the toll as we wanted to get into Hondarriba not too late. The drive was lovely and the roads are so good it took us no time to get there. We have chosen the same campsite as last time. It’s really only 10min away from the campervan depot and we knew our way around. We arrived at around 6pm and I waltz in to book our spot. Ah sh&t! No room at the inn. The lady behind the counter very kindly call the next campsite along the way, but guess what no room at all! Damn now what!

So our choice was to head further along the coast of Spain and take our chances. OR head across to France and try that side. We figured Spain would be fuller as everyone heads to that coast it’s cheaper so we would try France. And secretly Chris quite fancied a quick nip into another country.

Here is where the story turns bad! We chose a campsite…. ok Chris chose one and then I suggested another. Then the mobile decided to give us grief and we were struggling to connect to check the address. So we used Tom-Tom and just put in a road name. Then the traffic across to France, which is literally across the river, was madness. Not sure if it’s rush hour but it’s close to 7pm and road works and traffic everywhere. Chris had planned on leaving just under a 1/4 tank in the van as that’s I show hey gave it to us but now with the extra driving the light goes on! And when we eventually get to the road where the campsite is…..nothing we can’t find it. Chris is muttering and says let’s just go the one I wanted and get done. So I reprogramme and we continue the hunt. Up and down narrow streets we eventually arrive. Yes, the Madame says I have one last space. It’s just tarmacked no grass( nothing actually a parking spot) and it’s €45 for one night. WTF! I look at Chris and through clenched teeth is says ‘we will take it’

What a rip off! I mean the campsite, Camping Ametza, is lovely with a swimming pool and entertainment(Basque choir and wood cutting demo) and a shop and restaurant but we stuck on a piece of tarmac with the sun in our eyes! We rebelled, instead of packing we put out the awning and chairs and drank. Me I drank champagne and Chris a couple of panache’s. 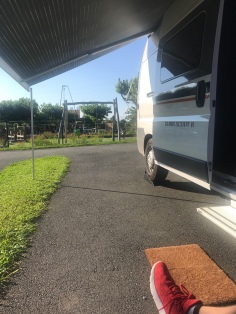 Our huge campsite in Hendaye, France 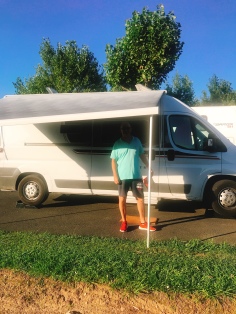 Eventually, when it cooled down we started the packing and cleaning and it was quite a late night. As usual, we have accumulated too much stuff that we need to throw out! 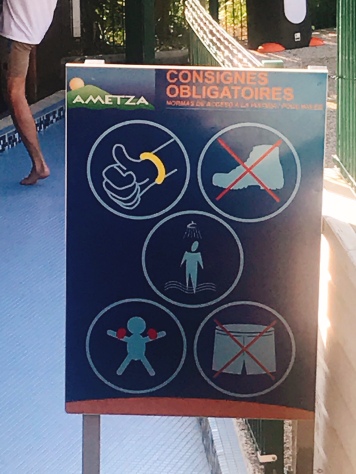 Everyone leaves their shoes outside the pool area, and no one steals them!

We collapse into bed as the rain pours down after this very hot evening and hope we can get up one time, get going and not run out of petrol.

This is not the end of the story as the next morning we first had to deal with a drama with Chris’s wound and ended up an hour later than planned. Then Tom-tom( the bitch) decided to take us a weird and crazy way through residents only lanes back into Spain.

But all’s well that end well as we arrive on time with petrol at the depot and within 30 min we were at the station waiting for our bus to Bilbao!

And here ends our trip except to say we arrived in Bilbao with luggage in tow but managed to find a quiet neighbourhood restaurant for our final menu del dia! Lovely food, lovely service bad experience as somehow instead of Chris getting the cheesecake he wanted for dessert he got melon! ( my fault of course!) 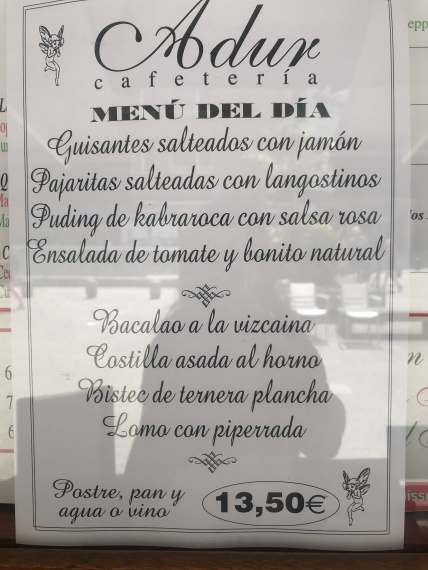 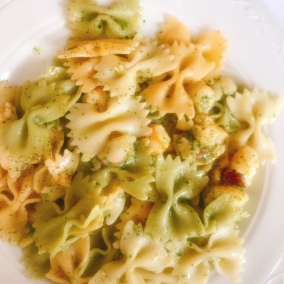 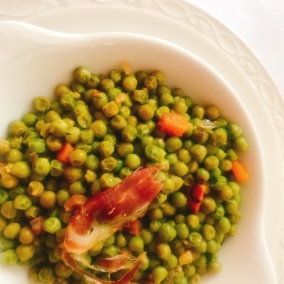 We were headed from Bilbao to London. Then from London to Jersey the next day for a wedding.

Maybe I’ll write you a little story about that……

To cheer me up Chris took me for a walk! And a toastie and a drink. This is the boardwalk in Monte Gordo. The sun was shining and I really didn’t need that many layers. The sandwiches were tasty the drinks were cold. We even had an ice cream. So I’m feeling a bit brighter 🥰⭐️🌞 have a super weekend all our lovely friends ♥️
Felices Reyes to all ! Today is El día de los Reyes. The 3 Kings arrive to bring presents to the town kids & adults. Last night we experienced our first Kings parade. It starts at 4pm at one side of Ayamonte and goes on till 8pm. Of course we had a great view as they walked right past our building. They end at the town square where the mayor welcomes them to Ayamonte and then they fling presents and more sweets into the crowd. The highlight for Chris was the floats flinging sweets at him through the window! Of course I had to scrabble along the floor and stairs picking them up! We had quite stash but I’m not sure who is going to eat all those sweets! Apparently the town hall bought 10 000kg of sweets to distribute 😚hmmm can you imagine the sugar rush putting those kids to bed!
First NYE in Ayamonte! Making new traditions, discovering old ones and generally having a great deal of fun. It was just the two of us but the Ayamontinos made us feel so welcome. The party started in the afternoon and by 7pm it was rocking. Music at all the bars , from disco to flamenco to 80’s live concert. All ages partying together. You never feel too old or not cool enough. At 10pm everyone goes home to eat and celebrate midnight with the eating of 12 grapes ( see our vid we did it! ) & then afterwards the proper party starts. When your neighbour invites you to a party starting at 1:30am then you know …..Happy New Year 2023 🍇🎈🥂
Magical Christmas of family from all parts of the world. Lots of outstanding food prepared by all but mostly by the head chef Christopher George Parsley. Games played , Carols sung , long dog walk in between courses. What more can you ask for the a family at Christmas! Ps: the dessert was a basque burnt cheesecake !
New country = new friends | lunch vibes with Paula celebrating her birthday at @rubens_beer We really enjoyed the food, the fire & the great company.
First a little culture, some sightseeing , some shopping & eating ( of course!) next up - the game . 🇫🇷 vs 🇿🇦