It used to be MNO( money no object), but now I’m afraid I’m in for AATB( all about the budget), but a girl like me is adaptable. I did remind him that I always said I was easy, but I’m not cheap!

Anyway off to Munchen to pick up the “looxury” camper van. I can’t wait to see it. Just out of interest we travelled to Munich from Bologna via train. What a lovely train journey, it was around 6 hours long. we had lovely seats and the countryside was magnificent. The train goes up to through Verona, over the Brenner Pass and past Innsbruck. the only problem we had was the onboard food, thumbs down for “Henry am Zug” and the really terrible sandwich!

Rose: Its really quite beautiful at the Marienplatz but OMG it’s expensive!

Especially after coming from Italy where we paid €1.50 for cappucino vs €2.50 this morning in a coffee shop.We spent the morning walking around the Viktualienmarkt. Lots of fruit, veg , cheese and lots and lots of meat, especially sausages.

We walked around looking for the “Parsley Pursuit of Perfection” cherries.

Eventually I persuaded him to buy some but they did not live up to the standard.

After eating some bratwurst and the obligatory beer, which was lovely,we took a walk to the Englisher Garten.

Chris : A little like a mixture of Hyde And Central Parks, with little beer gardens and ice cream spots dotted around most corners and the Germans love of “natur” showing itself, nude bodies taking in the sun  with not so much as a raised eyebrow, or anything else for that matter.

A halbes (half litre) beer, which seems to be the smallest size to order without peals of laughter following one,  and a carafe of wine with a pretzel* and we are set for an hour or two taking in the gardens and people watching.

Rose interjects**chris nearly has heart failure when they charged € 11.60! Three times he tells me this is the most expensive drink we have had you know!

The saga continued that evening when we went to dinner in the lovely area of Schwabing. After walking all around in the “Parsley Pursuit” of restaurant perfection we settled on an Italian. Dinner was ok , drinks were expensive. I had a spritz and then Chris ordered me a glass of wine. When the bill arrived , eek the glass of wine was €7.20. Cheeky waiter had given us the most expensive wine by the glass. And then to add insult to injury he argues with Chris and says but he automatically gives the best!

Ok so not a good experience in drinking and eating in Munich. We will try again another time. So a good nights sleep and we will be off to find this camper van place.. 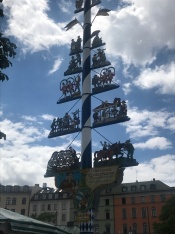 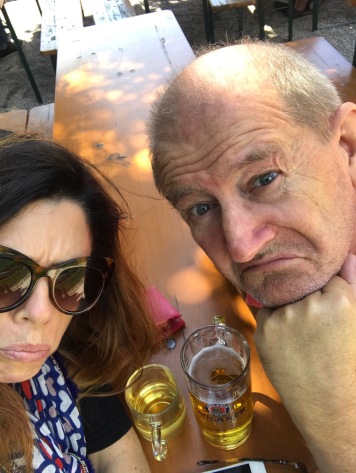 2 thoughts on “The start of the honeymoon and Chris sets the budget….”

Lovely little Thursday lunch at Casa Silveira. The tapa ( la pesca de atún 1919: tuna /crunchy curry /potato) on the artists palette is part of the Ruta de la Tapa in Ayamonte this month. We followed this with lovely tuna on the plancha and lomo(pork) in sweet wine. For those of you back in Cape Town, essentially it was like having lunch in Paarden Eiland. We went to check on our cupboards at the factory ( long story for another day) and ended up in this lovely little locally very well supported bar! Friendly service , lovely food and with a drink each it came to a grand total of 8€. PS: things we love about Spain.
Happy 4th anniversary to us ( the official unofficial date) Let’s just say we have nothing to complain about. The weather is warm, the social life has doubled as we met two more friends & language school is nearly over for the year.
This month is a chance to try out a signature tapa at some of our restaurants in Ayamonte. Of course no ways are we going to miss out , so we started already with 2 this weekend. One from @elconcepto.me & one from @lapuertaancha Both were great and watch this space for more. You know us guys , we love to eat!
Walk through Vaccination! Today was my chance to get my first dose. Thank you Ayamonte 💉
One down! Happy to be vaccinated
A weekend away , what the hell! Remember those ....